Dog Poop and the Fine Art of Raking.

I like my garden.  And I like to hang out in it.  I like all the flowers and trees. The blueberry bushes, mauve lilacs and sundry shrubs with no names.  The bird houses clinging to the Garry Oak trees are cute and folksy.  But most importantly, they attract delightful birds into our little piece of the world and that fills me with glee.  It’s spring and I’m itching to get out there and watch my husband do all the grunt work.  I admire his talent for breathing new life into the places where unpleasant dead vegetation has amassed over the winter months.  He seems to enjoy doing that.  I see no reason to discourage him.  I prefer to putter.  Plant pretty things.  Pansies.  Petunias.  Poppies.  And flowers that start with other letters too.  Like Geraniums and Marigolds.

There was a time when I was a great gardener.  Or at least I worked hard at it.  Did all the grunt work like my husband does now. When I was living in Toronto with my two older kids, my summer weekends were spent mowing lawns, trimming hedges, dead-heading flowers, staking tomato plants, plucking peppers, weeding and watering.  I got my hands dirty and my knees bruised.  It was back-busting, nail-breaking work.  It involved blood, sweat and tears.  But it was also glorious.  And gratifying. Especially at the end of the day, when I sat in the tranquil shade of our grapevine canopy and admired my day’s travail.

We lived in a predominantly Italian neighborhood with a smattering of Greek, Portuguese and Jamaican folks.  I rarely knew what anyone was talking about because I didn’t speak any of those languages.  Ma was a second generation Italian and only knew how to count to ten, so consequently that was the extent of my Italian conversational skills. Not very engaging.  We were the foreigners in Toronto’s Little Italy.  The Mangacakes.  But nonetheless, we felt at home there. Possibly because in their warm olive complexion faces, I saw Ma.  But despite the language differences we were able to communicate, especially in the back gardens where our Italian neighbors and I spent much of our spare time during those steaming summer months.  And I definitely understood good advice on growing tomatoes and peppers – the vegetables that grew in abundance and seemingly effortlessly in that climate.  With their advice, even I grew them with ease.

I look back and marvel at the gardening language we employed.  It consisted of hand gesturing, facial expression, demonstration and example. There weren’t a lot of words because there were so few we had in common.  Yet we learned this universal language that crossed all cultures and parlance.  It was as beautiful as the luscious red tomatoes and delectable green peppers we grew.  Communication at it’s simplest.  You point.  You dig.  You hoe.  You stake.  You pluck, pinch and prune. You scratch your head.  You smile.  You laugh.  You say thank you.

Little back story.  I come by my love of gardening honestly.  The Old Man taught me all the basics.  Back then we didn’t call it “gardening” though.  Far too gentile and refined sounding for that time and place.  It was yard work.  Raking grass or leaves in the front yard.  Digging up earth, planting rows of seeds, watering, weeding and harvesting in the backyard.

Over the years, The Old Man tinkered with the backyard, adding a row of Poplar trees along the fence line and a Weeping Willow, that eventually became a nuisance despite it’s beautiful forlorn hangdog branches. It’s labyrinth root system overtook the yard and sucked the life out of everything.  There were a couple of evergreens here and there.  But the piece de resistance, the shining glory of the backyard were the Manitoba Maples.  Two beauties strategically planted about ten feet apart.  Just wide enough to hang a red white and blue striped hammock.   The swinging bed of afternoon daydreams and early evening siestas.  The double swing for giggling grandkids.  The humorous pratfall for anyone who dared to keep their guard down.  The place to rest your weary soul after a hard day’s work.

In the front yard there were flowers under the front windows.  Marigolds and Geraniums mostly.  These were the Old Man’s favorites. I suspect because they were both hardy and happy plants.  Bright and cheerful all summer long and well into an Indian Summer. Feisty enough to make it to Thanksgiving (Canadian) and some years tenacious enough to hold out until Halloween.  There was a wild rose growing between our yard and our neighbors.  The scent of which I will yearn for until the day I die.  But the centerpiece of the front yard was a beautiful lilac bush that bloomed in June.  Ma would pick a bouquet for the kitchen table, the sweet romantic fragrance enveloping the entire room.  On the boulevard grew another magnificent Manitoba Maple.  Every house along Kenogami Avenue had one.  They were a gift from the city to a weary wartime street.  Green lush shadow casters in summer.  A riot of autumn colors in September and October.  Naked, flexible and courageous all winter long.

I’ve heard it said that it is our sense of smell that has the power to conjure up past memories and emotions.  That appears to be true for me.  The first hint of Spring in the air and I’m ten years old in the front yard with The Old Man.  We’re raking.  (It’s probably more accurate to say, he rakes and I watch and pick up things with mine.  Just the same, I learned the fine art of collecting and disposing of winter debris.  A lesson that would serve me well years later in my old Toronto neighborhood.)  All the snow has finally melted.  The grass is still soggy and mushy in spots.  At first blush it looks dead and gone forever.  Hopeless.  The smell is a paradoxical brew of pure clear 100% Northwestern Ontario Spring air and fusty rancid months-old dog poop.  Then after all the raking and observing is done, something supernatural occurs.  God lifts the winter carpet to reveal the wondrous new green sprouts concealed beneath. And The Old Man and I stand there leaning on our rakes surveying the scene, and we’re hopeful. Optimistic. Expectant.  Summer is coming.  Soon the lilacs will bloom.

On St. Patrick’s Day, The Old Man, my father, the Breadman had dinner as usual at the old folks home, where he had spent his last year.  Afterwards, he went for an early evening siesta.  He closed his eyes and then held hands with Ma.  He left quietly without any fanfare.  No trumpet calls.  No slapping spoons.  No good-byes or family gathered by his bedside.  When I got the news, my first  thought was “just like The Old Man to leave town on St. Patrick’s Day.”  And my second thought was “I love you and say hi to Ma. I’ll miss you both forever.” 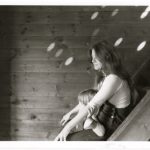 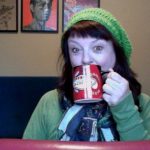 Next Story:
There’s Nothing Like the Smell of Coffee in the Morning.