Why I Never Liked Halloween.

I hate Halloween.  There I’ve said it.  I’ve come clean.  No more pretending.  Putting on a false face.  Wearing a polite mask while the rest of the world gushes fanatically about how killer Halloween is. I think it stinks.  Truth is, I’ve always hated it.  I can’t think of one happy Halloween memory.  It terrifies me.  Even as an adult.  I’m intimidated by complete strangers dressed in costumes and wearing masks or bloody makeup knocking on my door.  Even the small ones make my bones chill.  Nothing more sinister than a teensy weensy spider.   Some would say that’s kind of the point.  But not for me.  Before you call me the Grinch or Ebenezer Scrooge of Halloween, in my defense, there are some spellbinding reasons I feel this way.

Little back story.  I grew up in a small town in Northwestern Ontario.  Winters were cold there.  Very cold.  And very long.  Bleak at times. Some years the first snowfall came as early as October.  And the last one could come in May.  May, for God’s sake.  In between the snow was relentless.  Some years it felt like perpetual winter.  Perhaps that was just the teenage me in a bad mood.  But still.

This foul, malicious mean-spirited weather played a major roll in shaping, if not permanently blackening, my recollections of October 31.  I don’t even know what to call this thing.  Is it a holiday?  An event?  A special occasion?  A celebration?  Festival?  For me, it’s none of these.  But it truly was, and always will be, a night of horrors.

Here are the blood-curdling, spell-binding, hair-raising reasons why.

So there you have it.  I traipsed around the neighborhood with The Old Man, frozen, sick, exhausted, pretending to be the woman on a pancake box, terrified and lonely.  Only to get home to 204 to find a pillowcase full of disappointing and lackluster treats.  Of course, this did not deter me from eating every last morsel by the middle of November.

I stopped this torture when I was 11 or 12, and no longer “went out.”  Back then you didn’t wear your costumes to school, nor were Halloween parties widely embraced.  I was off the hook.  Also, decorating your house was unheard of.  If there was a carved pumpkin on the front steps you were possibly over-the-top and an extreme Halloween celebrator.  It wasn’t the festive occasion that it is today.  Not by a long shot.  At best, it was a blip in the radar on the way to the best holiday of the year.  Christmas.

There was a blissful decade where I avoided all things Halloween.  And then I had children.  Don’t misunderstand, it still wasn’t something I embraced, nor got enthusiastic about.  My costume making skills hadn’t improved with adulthood either.  My imagination in this area appears to be stunted or nonexistent.  I always liked the notion of a tickle trunk but just never got around to creating one. I was a terrible costume maker despite my Seamstress chops. I could make an evening gown for Ma but for the life of me I couldn’t stitch together anything interesting for my kids to wear for Halloween.  No fierce animals.  Nor mythical creatures.  Nothing regal nor royal. Otherworldly.  Nor conjured. Nothing evil.  Nor good.  I was hopeless.

Over the years I made two feeble attempts at fashioning a costume from scratch. There was the yellow crayon I made for my oldest daughter.  She graciously wore this felt tube a couple of years in a row. The first time it was a full length crayon.  Ankles to neck.  The last time it was more mini.  Knees to neck.  The other atrocity was the Casper the Ghost costume I made for my youngest daughter.  The head piece was a complete fail.  It looked more like a brain on steroids than poor Casper’s head.  Thank God she was only three at the time and unaware that the costume was a hot mess.  And that her mother was responsible.

This brings me to reason number 6 for finding Halloween horrifying. This has nothing to do with the child from 204.  This is all about the adult me.  I feel inadequate.  Ineffective. Incapable of making a good costume. A lifetime sewer and I can’t stitch together a single idea that works.  I am a complete and utter failure in all things Halloween.

Despite all of my Halloween trauma and agony, it appears I have not passed any of this anxiety and distress onto my three children.  Well, perhaps a little onto my youngest daughter. Maybe this has something to do with the Casper costume. Let’s just say, she’s seen pictures and leave it at that. They fully embrace the holiday-occasion-event-spectacle.  They dress up.  They’re gifted costume devisers, especially my oldest daughter.  They have fun.  They hoot and holler. They go boldly into the spooky night.  Unlike their mother who cowers in the corner waiting for the night to be over.

Footnote to this story.  A few years ago I wore a costume to work one Halloween.  Some of my colleagues were dressing up for the day and I wanted to be included in this group of “fun” folks.  I went as Cindy Crawford.  The costume was simple and understated.  I drew a mole just above the outer edge of my lip.  It was identical to Cindy’s.  That was it.  The rest of the costume looked like I always looked on Halloween.  Dull.  But I did have a great time that day getting my colleagues to guess who I was.  Best costume ever. 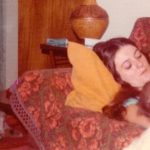 Previous Story:
I am a Couch Potato. 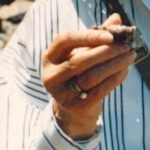 Next Story:
My Mother’s Hands.