Life Before Me and You and That Other Guy.

Sometimes I find it hard to imagine that my parents had a life before me.  I’m also certain that it’s hard for my children to imagine me having a life before them.  On some level I guess I didn’t.  Not like this anyway.  It’s like my life is divided into two.  Life before kids.  And life after.  Each child changed me.  Made me more.  Expanded my capacity to love.  Larger and richer.  Deeper and unconditionally.

Before I met E I had pretty much given up on the notion of ever finding love.  Much less a husband.  And having another child was seemingly impossible.  Yet both of those things happened.  Proof that miracles do happen. Even if they were just the bland run-of-the-mill types.  Not your water into wine.  Or parting of the seas.  Raising the dead.  But these events were every bit as miraculous to me. This was also the case for Ma.

Little back story.   Before Ma met The Old Man she had been married.  Plus she had three kids.  She met her first husband just before WW2.  The details of this period in Ma’s life are sketchy at best.  All I know is that he was in the air force, flew off to war and evidently came back long enough to conceive children.  In the span of five years, all in one week in April, Ma had three kids.  Then after the war ended he “shacked up” with some woman in Manitouwadge or Wawa, and there he remained until the day he died.  He abandoned Ma and her children and never reappeared in their lives.  In return, Ma rarely spoke of him and my siblings did not preserve any memories of the father they never knew.  He was like “He-Who-Must-Not-Be-Named” in the Harry Potter books.

Ma met The Old Man when she was working the 7pm to 3am shift at a restaurant called Porky’s on St Paul Street.  He was working as a deliveryman for Woods Meat Market at the time.  He used to go in there after midnight for coffee.  Given the hour he frequented the joint, I’m assuming it was where he went after the bar closed.  He may have originally gone there for coffee but it was Ma who kept him coming back. Ma never said much about their first encounter except that he was incredibly handsome and had beautiful blue eyes.  She also said it was love at first sight.

My parents were from a generation of folks who didn’t discuss their romance.  Nor did they engage in public displays of affection.  At the most, there was hand holding, quick pecks on the lips when saying goodbye, and occasional awkward hugs.  For photos The Old Man would place his arm around the back of Ma’s waist.  That was it.

Due to this lack of romantic mythology I have fabricated my own version of their budding courtship.  It goes something like this.  Two incredibly shy people.  One with blond hair and blue eyes.  The other a raven haired dark-eyed beauty.  One Finlander.  One Italian.  Fire and ice.  Yin and yang.  He sits at the counter after midnight and orders a cup of coffee.  Cream and sugar.  Then he orders another.  She bustles around serving coffee and late-night sobering-up food to the other patrons scattered like lost sheep in the ratty Naugahyde booths.  He stays until three when the place closes.  He can’t get his eyes off her.   She steels glances his way.   Bolstered by a few too many drinks from the local watering hole, he’s able to find the courage to say hello.  By morning that false confidence would evaporate.  But for those few fleeting hours after midnight his shyness, especially around women, was held at bay.  She’s exhausted from raising three kids and working nights.  His sweet flirtations revitalize her though and put the youthful bounce back into her step.  She blushes and says hello back.  Their conversation is endearing in its bashful clumsiness.  It doesn’t come easy.  Still they persist.  Night after night.  This goes on for days, weeks, months perhaps.  Then the shy blond blue eyed Finlander musters the courage to ask out the Italian beauty.  After one date she knows he trouble but it’s too late.  She’s madly in love.  The sparks fly.  Then there’s me.  And life begins.

While Ma was working the night shift at Porky’s my oldest brother was at home with my other brother and sister.  This was the little family that existed long before I was even a twinkle in The Old Man’s eye.  By the time I was born my brothers were well on their way to adolescence.  My sister was old enough to take me for walks down the street in my carriage and dress me up like one of her dolls.  Because I don’t remember anything before the age of five my first impressions of my siblings is that they were quasi-adults.  Big people.  I knew they weren’t old like The Old Man and Ma but they weren’t kids either.  Definitely not playmates.  It was a peculiar psychological head space.  On the one hand I understood that these big people were my brothers and sister.  Yet on the other, I felt very much like an only child and longed for siblings that were closer in age.  In my childhood fantasies I often pretended that they were.

Despite the age difference I loved them all dearly.  I idolized my ‘big’ brothers.  They were both handsome, kind and patient with their baby sister.  They called me Babe.  I also loved that they were so different from The Old Man.  They weren’t alcoholics for one thing.  And they were the defenders of Ma, my sister and I.  They were our heroes.  Not cape wearing or white horse riding.  But on those dark nights when The Old Man came home reeking of alcohol and ranting about some past injustice brought upon his late mother at the hands of his old man, they were brave lionhearted men.

They were also boys of that era.  I loved that about them too.  They had slicked-back Brylcreemed hair and drove a mauve colored Harley.  They smoked roll-your-own Export A cigarettes and had do-it-yourself tattoos.  Our neighborhood was full of guys just like them.  Most of them hung out at 204.  But this was all exterior stuff.  The way teenagers looked back then.  Fashion and fads.  Ma always said she had good boys.  She was right.  Good boys who grew into sterling men.  Married their soul mates and big loves. Raised wonderful families and led good lives.  Decent.  Ma taught them well.

The relationship between my sister and I was akin to oil and water.  We didn’t mix well but we did love each other despite our innumerable differences.  Genetics may have had a hand in this. Just who we were.  But mostly I think we were both products of our own times.  We were imprinted by the decades that informed us most.  The indelible impression.  She was a good girl from the fifties.  Defined by maintaining a high morale code and preserving one’s virginity until marriage vows were exchanged.  I am a product of the sixties and seventies.  Peace.  Love.  And understanding.   Complicated and perplexing.  And yes, there was living in sin.  Nothing was being saved for marriage.

Enough said.  My sister and I were different.  We loved each.  We fought like two female cats in heat.  Ma had to physically stand between us on more than one occasion.  We always made up and made nice.  Because in the end we were both good girls.  Just with different points of view.  Not wrong.  Not bad.  Just different.  As adult women we have come to terms with all of that.  The oil and the water was given a good shake.  It has emulsified.  Ma taught us well.

My parents’ relationship was plagued with challenges right from the start.  Legally she was still married to the man in Manitouwadge or Wawa.  She was raising three kids on her own, money was scarce and at times her world was a dark and frightening place.  The Old Man was four years younger, immature by all accounts, mourning the recent loss of his mother, and ill-tempered when drunk.  Not the best formula for starting a new life.  Yet somehow they made this thing work.  It wasn’t perfect.  But it wasn’t too shabby either.  More proof that miracles do happen.

Flash forward to 1992.  History repeats itself on the West Coast.  I was a single mother of two.  Working at a little graphic design company owned by an old friend from back in the days at 204. He was the first big heartbreak love of my best friend, the person who introduced me to my ex-husband and my boss.  My mantra back then was “you’ve just gotta love a guy like that.”

On a rainy Saturday afternoon in March of ’92 I met a blond blue eyed alcoholic at a rundown country bar my sister dragged me to because I needed a little fun in my otherwise dull life. It was there that I fell head over heels for one of the jammers on stage.  He played upright bass in a bluegrass band.  There was just something about the way he played that thing that made my toes curl.  After his bit on stage we danced.  And we’ve been dancing ever since.

I dove in with my eyes wide open.  I’d seen this movie before. I knew how it played out having witnessed it up-close and personal my entire life.  There we were.  Just like Ma and The Old Man.  Yet not.  We’ve written our own story.  Everyone does.  This was our shot.  Sacrifices were made and compromises struck.  A beautiful blond blue eyed child was born bearing an uncanny resemblance to both her Dad and The Old Man. 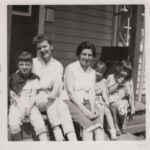 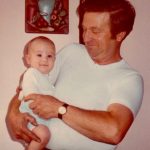 Next Story:
What Happens in 204 Stays in 204 and the Fine Art of Secret Keeping.