It Can Be Awkward.

The day I had the epiphany, that ‘ah ha!’ moment after reading The New York Times article, I got to thinking about when this whole thing began.  Not the world beginning, that big bang thing or whatever it was that started what is commonly known as life.  I’m talking about something far more personal.  I’m talking about my life with God – and when that all began.  I wish I could say it started in the womb and that I had these primordial memories of being in heaven and sitting on God’s lap, but it didn’t.  Or if it did I don’t remember so that doesn’t count.  The best I can recall is that this ‘relationship’ (and I use that term loosely, at least in this context) began in elementary school.

I liked elementary school.  I made friends there, once I got over the terror of leaving my mother.  But that’s a whole other story, worthy of a couch and  damn good therapist.  I digress.

Little back story.  Up until this point I don’t recall being from a terribly religious family.  We celebrated Christmas (with presents under the tree and a turkey with cranberry sauce) and Easter (with ham and scalloped potatoes, new shoes and an awkward photo op.)  But we also celebrated Thanksgiving (with mashed potatoes, turkey with cranberry sauce, and get this – pumpkin pie instead of presents – malicious, vindictive, spiteful swap in my opinion) and Birthdays (no turkey, no cranberry sauce, no pumpkin pie but presents with a single focus.)  So in the course of the year there were many celebrations and it was hard to tell which ones, if any, had religious affiliations.  It was confusing at best.

Anyway, my best guess is ‘it’ all began in elementary school when I hooked up with Susan and Terry and we became the three Muskateers, so to speak.  They both went to church, as did many of my other classmates.  I did not. This made me feel bad.  Really.  So in an effort to not feel bad, or worse yet, to not be a cursed sinner I approached my parents with the suggestion that we go to church.  (At least this is what I recall.  I’m too old to have clear memories.  But we’re talking about God here and he/she/it forgives the forgetter.)  Of my parents, my father seemed to have the closest connection to some organized religion so we went to Christ Lutheran Church.  I believe my mother may have been Anglican as a child but that affiliation was long gone and best forgotten.  So there we were.  Lutherans.  Thus began my indoctrination into the Christian faith. 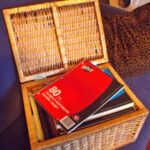 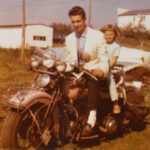 Next Story:
The Awesome Power of a Sweet Ride.